Best Finches For Pets You Haven’t Heard Of

Pet finch birds are a great option for the pet owner that wants to have an exotic bird but doesn’t want to go through all the trouble and expense of getting one.

Finches can be found in many different colors, shapes, sizes, and behaviors. They make excellent pets for anyone who is looking for a companion animal that requires about the same care as a dog or cat.

In this article, we will highlight some of the best types of finches that you should consider getting if you are interested in making your home life more interesting with these beautiful little creatures.

This list excludes common finches such as zebra finches because there are enough people talking about them already. 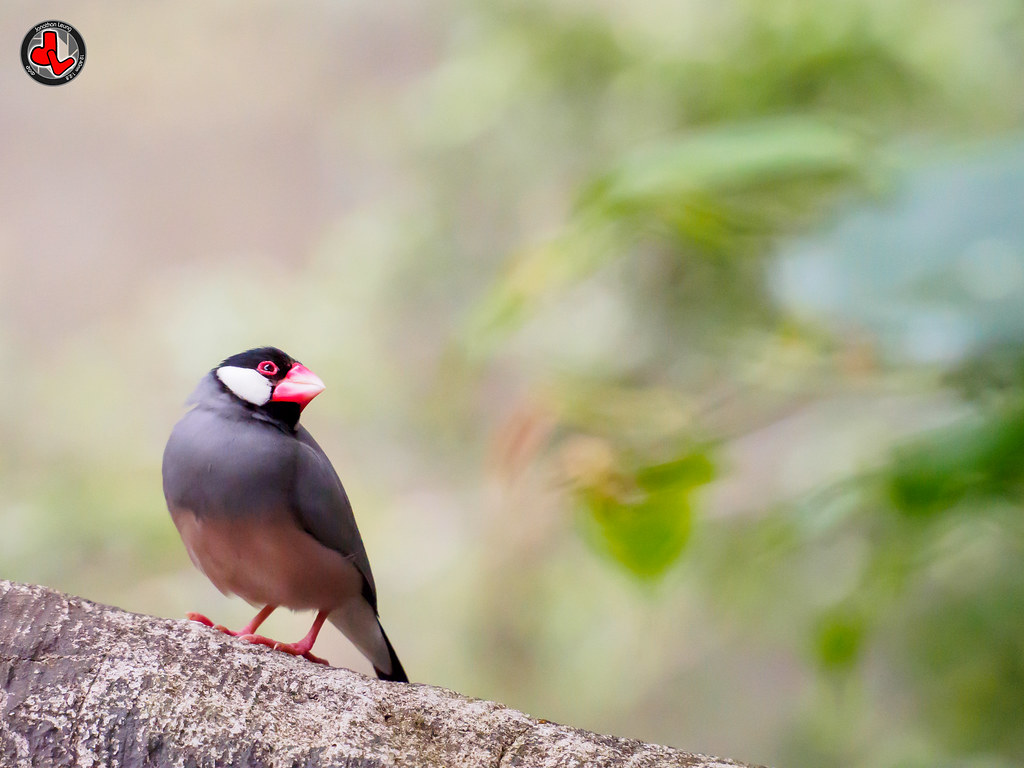 “Java Sparrow” by jonathan.leung is licensed under CC BY-SA 2.0

The java sparrow is a very small and colorful bird that makes an excellent choice for someone seeking a small pet. Often its feathers will be grey and white, with a black hood and white cheeks, and a large red and white beak.

Their average size varies between 5 to 7 inches which is not too much bigger than the budgie or parakeet. Its large beak makes it look bigger than it actually is.

If you are looking for a pet bird that doesn’t need much space, the java sparrow is probably your best option. They can be quite active birds so they will need a lot of attention when compared to other small finches. (Do remember that bigger cages are always better).

Pet finches are increasingly popular due to their low maintenance requirements, They prefer a diet of larger seeds such as wild rice, oats, and white millet. These birds are quite adaptable and will nest wherever there is a suitable environment.

This finch has now been considered endangered in its native java due to its proclivity to anger rice farmers. It’s also illegal in some states to own or import, So be sure to check your local laws before acquiring one. 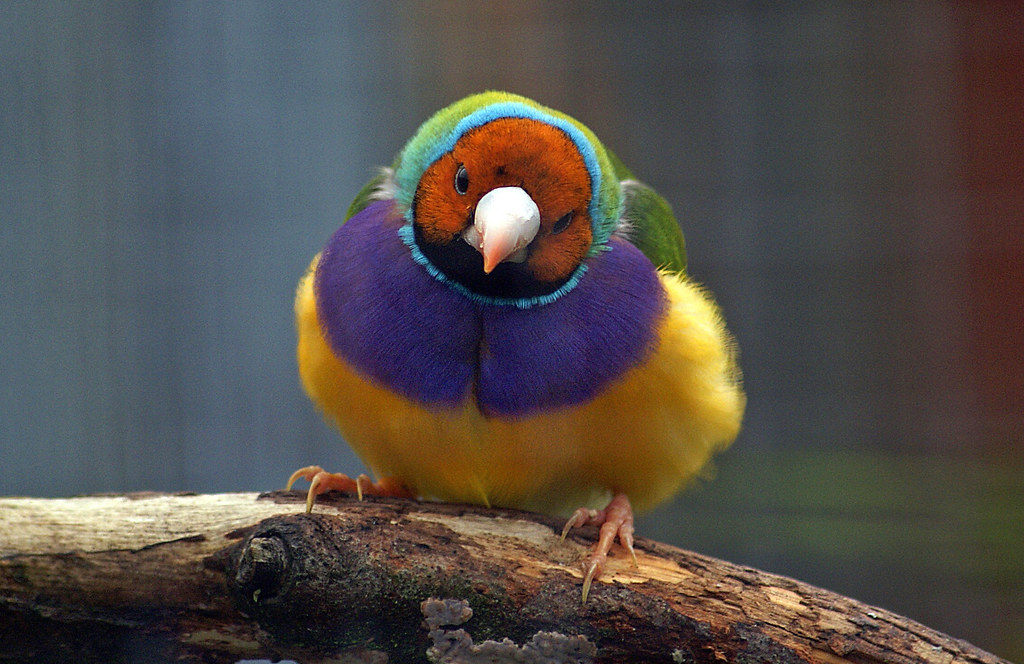 “Gouldian Finch.” by Bernard Spragg is licensed under CC0 1.0

The Gouldian finch is a large finch with a beautiful multi-colored body. Yellows, purples, greens, blues, blacks, red,s, and pinks. All in one cute tiny 14cm package.

They are not too good at mimicking human voices but that’s fine if you don’t mind them chirping away to each other all day long. If you want a bird that can tell a few jokes then maybe you are better looking elsewhere.

A beautiful bird that makes an excellent pet for someone who is interested in learning about and caring for a finch properly. Just remember that they need quite a lot of attention because they can get very lonesome without it.

Interestingly enough, From genetic testing and incompatibilities with breeding, science is starting to think this bird is in the middle of splitting into 2 separate species based on coloration, red hooded and black hooded.

Keep that in mind if you intend to breed them, and get ones that are compatible. 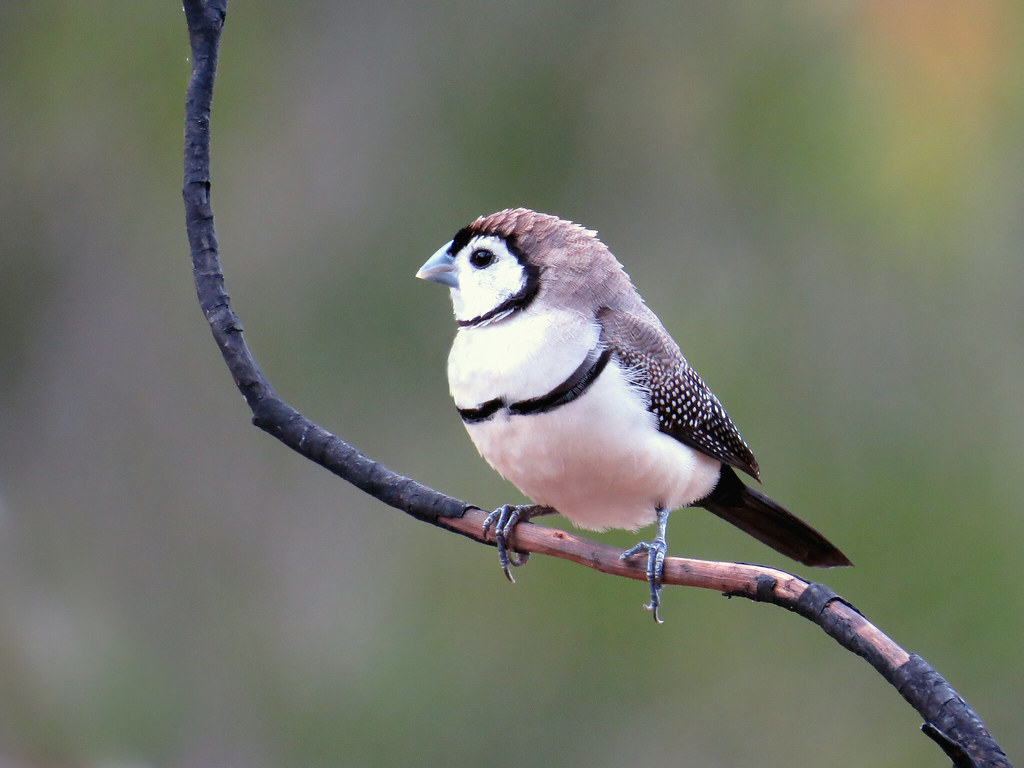 The double-barred finch might not be as gorgeous as the Gouldian finch, but it is possibly even easier to take care of. It’s also a lot cheaper than the Gouldian.

They are visually stunning with their coffee-colored head and body, But many owners consider its coloration lackluster when compared to the Gouldian finch.

At 10cm it’s a fairly small bird, they will also nest on the bottom of the cage rather than at the top. They are compatible with other finches, most notably the zebra or society finch. (Note: remember different finches will often get violent towards each other if they are not kept together as chicks). 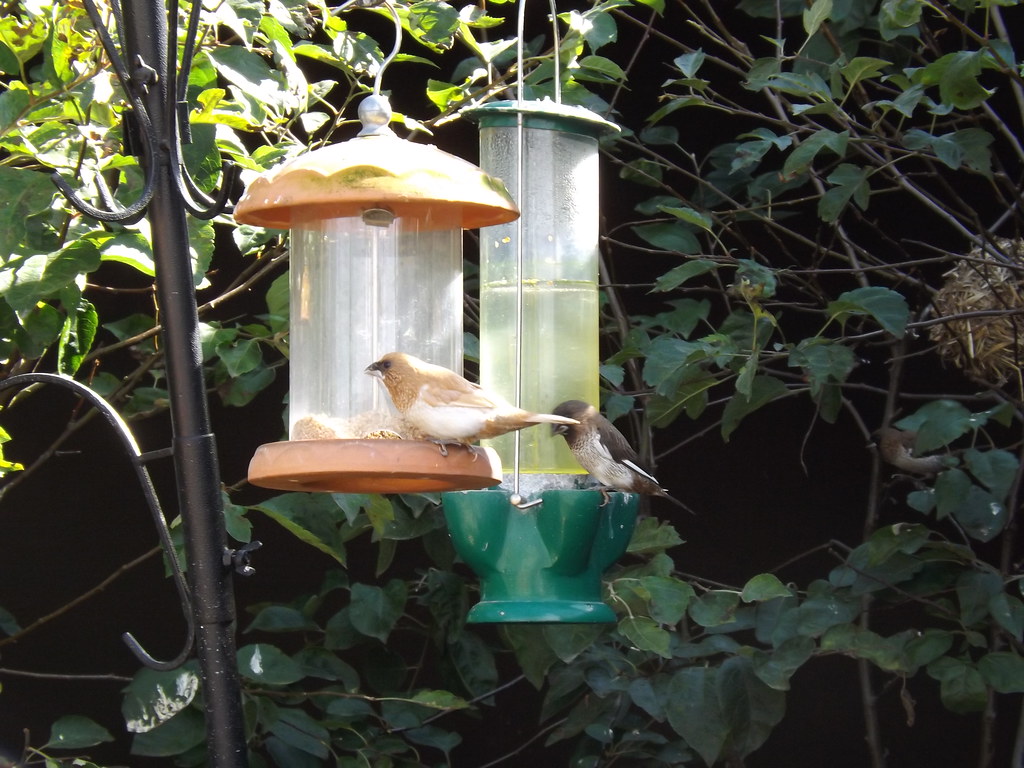 “Bengalese finches” by Marie Hale is licensed under CC BY 2.0

This caramel-colored finch doesn’t actually exist in the wild, it was bred to bring out the most attractive features of other finches. It’s a rare variety that can be considered endangered in some areas, as well as illegal to own or import into others.

At 10cm this bird is just slightly bigger than the double-barred finch. It is also a lot more affectionate and energetic than most finches.

This bird is beautiful, some people may even say it’s as pretty as a cockatiel. They are also quite intelligent and will enjoy interacting with you so long as they have the attention they need.

This finch is a great addition to any family, Its beauty makes it look exotic which draws interest to people who may not be too interested in birds otherwise. Just remember that its needs are above average compared to most other types of small pet finches. (More space and more food). 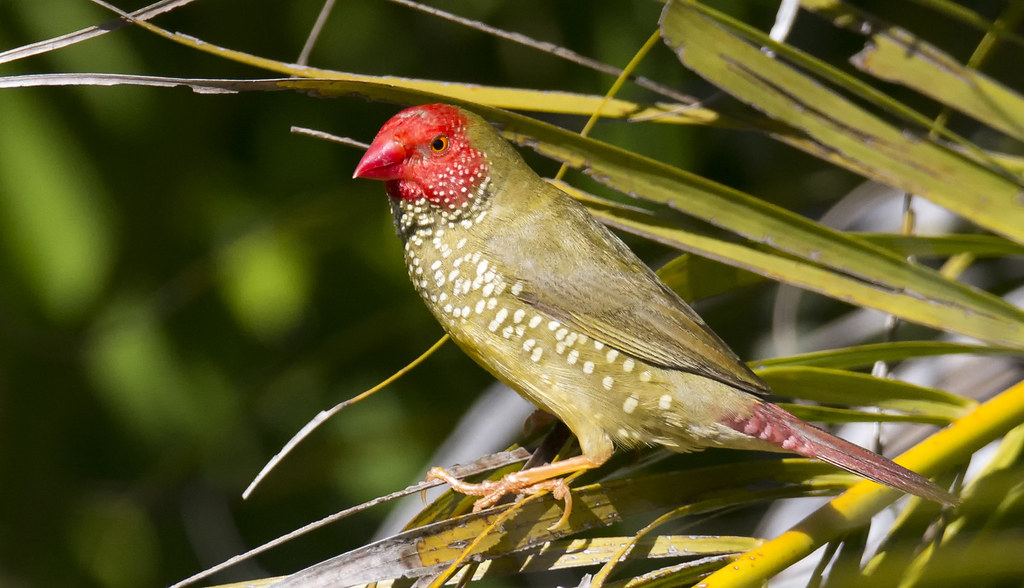 “Star finches 6” by Jim Bendon is licensed under CC BY-SA 2.0

At 10-12cm and approximately 9 grams, this tiny bird is probably one of the most unique specimens of finch. Green body, velvet tail feathers, orange beak, and face, with his entire body speckled with white spots up and down.

I also like to call this the DAX finch, because of the spots on Jadzia Dax in StarTrek 🙂

Of course, it comes in several other color mutations as well just like every other bird on this list, so plenty to choose from!

The jenday conure finch also makes a good companion due to their similar passiveness and affection towards people.

Like most of these other tiny birds, They are ideal as indoor birds in small apartments, so long as they have the attention they need to stay happy. It’s best that you get them when they are still chicks if possible since adult finches can be harder to tame and bond with due to getting older and more independent. 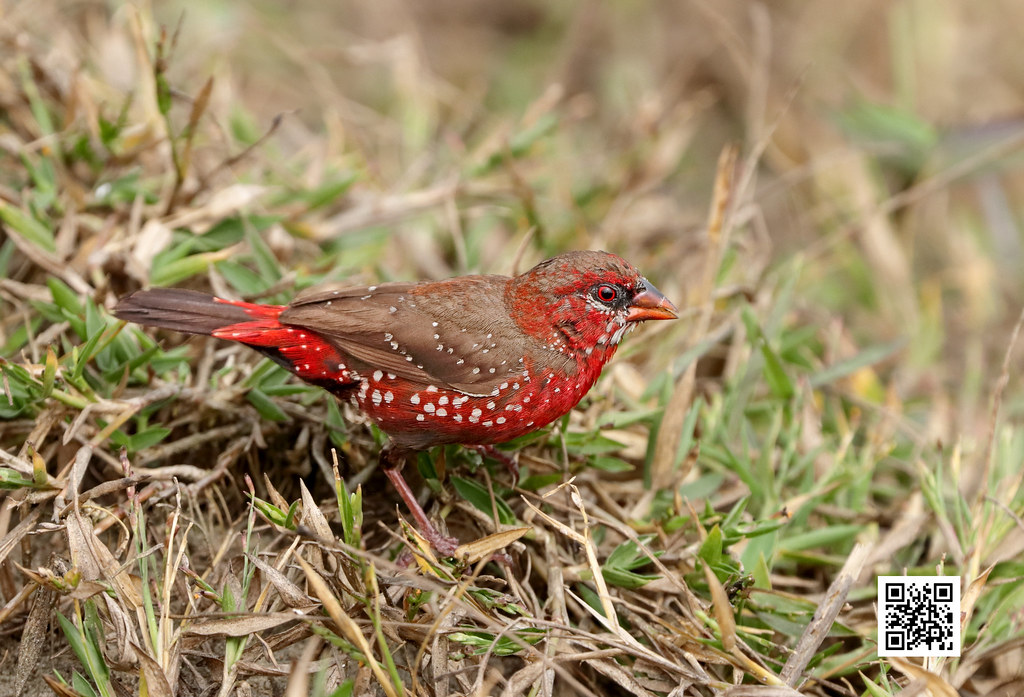 “Red Avadavat / Strawberry Finch” by Tareq Uddin Ahmed is licensed under CC BY 2.0

This eye-popping finch might be the most eye-catching of all finches, they are one of the oldest species of finches and were a favorite among royalty.

They are very attractive birds with a red body, white spots, and really do resemble a strawberry.

Unfortunately, these colors fade away every year outside of breeding season to a more normal brown and yellow, however, they certainly are beautiful. 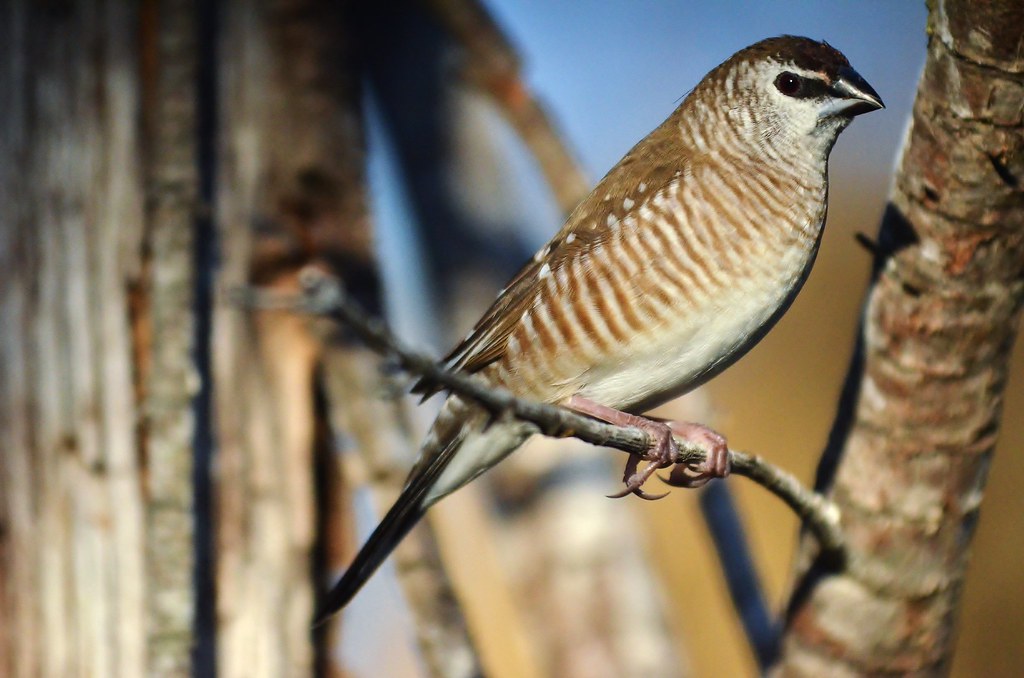 “Plum Headed Finch” by Laurie R B is licensed under CC BY-SA 2.0

The Plum-headed finch is closely related to the Star finch. Plum-headed is 11-12cm long, so they are a nice medium size bird that most people can keep as pets.

While related to the star finch, it’s not nearly as good-looking. But it has its appeal to certain people who enjoy browns, stripes, and spots. 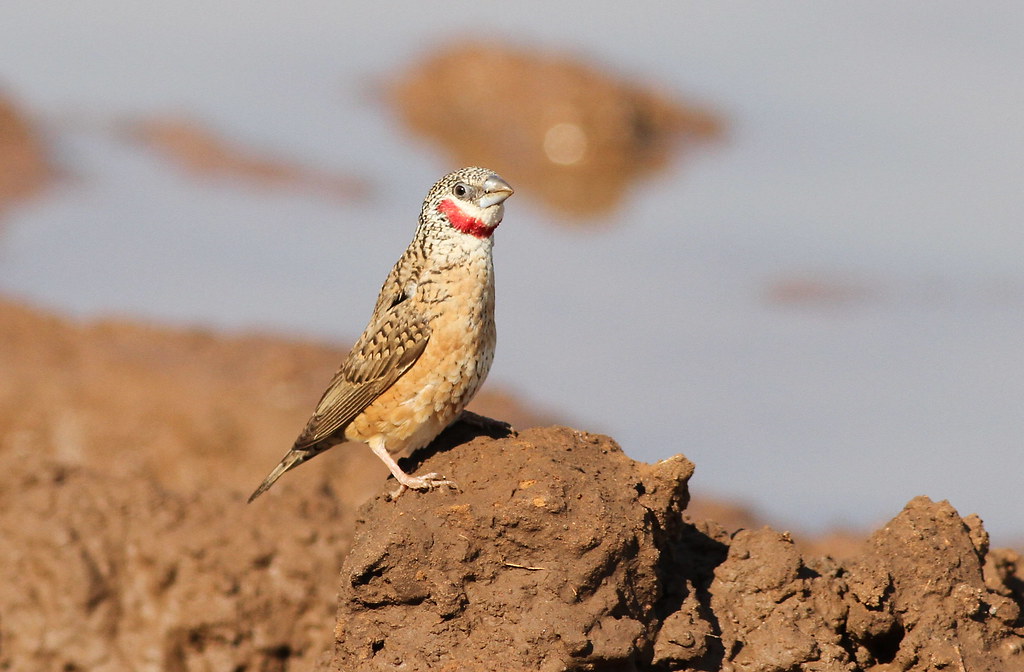 This bird has a very fun name, That’s because of the large red strip of feathers on its neck that resembles a gash or knife wound.

Unfortunately, As violent as that sounds, it’s got an aggressive personality that goes right along with its aggressive-sounding name. It

It has been known to attack and kill other finch species, not allowing them to live in the same cage. It even goes for their nests.

This bird is just about as big as a society finch at 10-13cm long and can weigh up to 18 grams. It needs plenty of room which makes it an ideal bird for experienced bird owners or large cages. 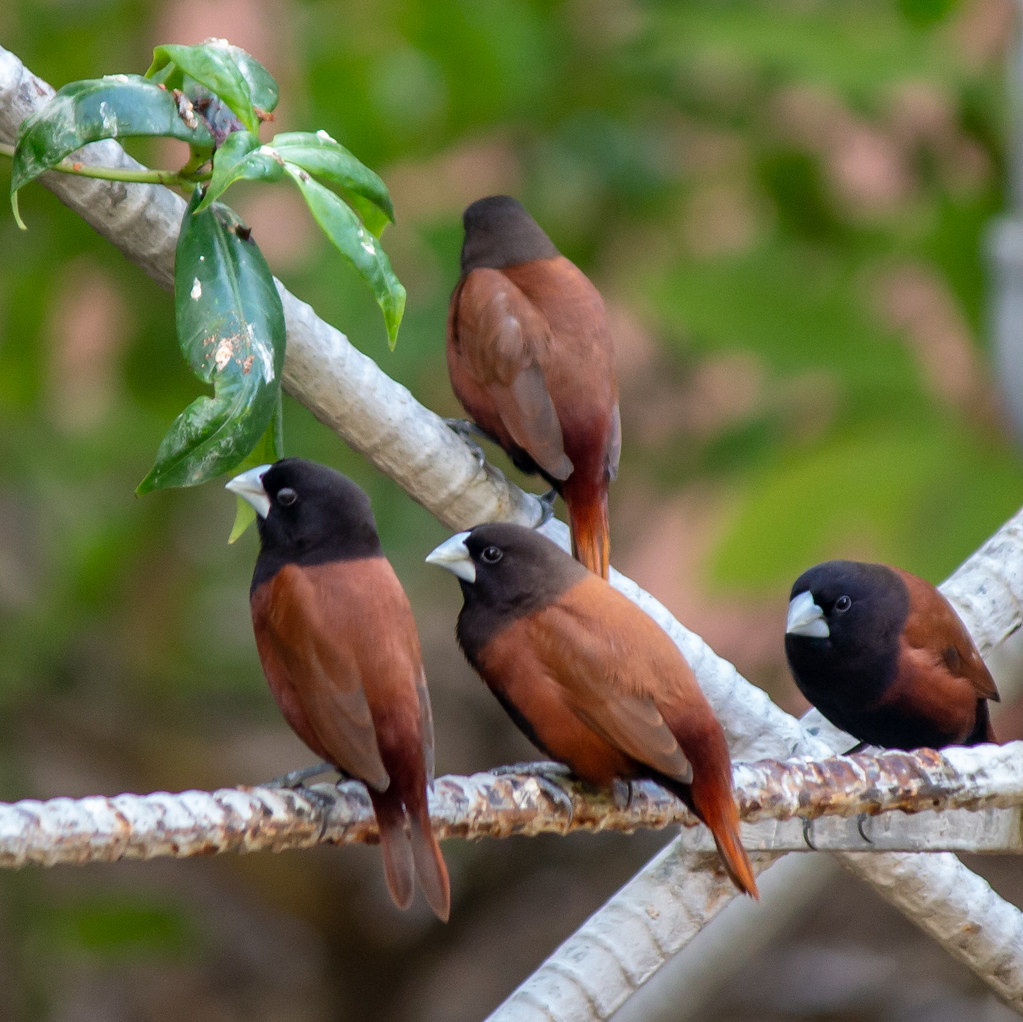 “Chestnut Munia, taken in my garden” by Ray in Manila is licensed under CC BY 2.0

The chestnut munia has a hard border of browns between its head and its body. its hood is a dark roast and its body a light roast. (Coffee fans will get it!).

at 12cm it’s a decent-sized finch, native to India, China, and other Asian countries.

They are kept as pets in Japan where they can be trained to talk and sing. They are said to be quite intelligent birds which are most likely due to their use of tools (like other finch species) While being able to learn words, they tend not to mimic them.

Not all munia’s are chestnut-colored though, they come in a variety of colors.

Pros And Cons Of Finches

Costs Of Owning Finches As Pets

A lot of the birds that are popular as pets, including finches, are illegal for people to have in some areas. You’ll need to find out if your locality allows you to keep them before getting one. If you can legally keep them, it will be a good idea for you to get them when they’re chicks so that they’re easier to tame and bond with. For the most part, they will need a large cage, so make sure you consider the size of your living space before getting one.

The cages and other supplies can be fairly pricey too; birdcages can cost $70-$150 on average for an okay-sized one and it’s not unheard of for some specific types of finch cages to cost over $300. You’ll also need feeders and other supplies, but those are relatively inexpensive.

You’re not going to be able to keep finches in a tiny apartment or tiny cage without having them get depressed or sick from being cramped up in there.

The best you can do is try to keep the cages as clean as possible and provide lots of entertainment for them (like toys), but that’s about all you can do with only a small living space. If you’ve got enough room though, then they won’t have any issues at all and will thrive.

So of course, that’s also going to increase the cost, luckily, all things considered, the biggest expense is the birdcage and the bird itself, Toys and accessories, nesting materials, etc are all inexpensive and plentiful.

It should also be noted that finches aren’t usually friendly at first, so don’t expect them to jump on your finger after you’ve had it for the first few days/weeks. They need time (and food) to become tame and friendly. You have to build trust with them before they grow attached to you.

Letting them out of their cage while supervised will help give them confidence in the open area as well as letting them know they can play outside too, not just inside their cage all day.

How Many Finches Should You Buy?

It is generally recommended that you have no less than two finches of the same type in your cage at one time. They are social creatures and would likely get lonely and depressed from being alone all the time, so having at least two will allow them to be able to play with someone, bond with each other as well as interact with you when you’re around.

This Is How To Safely Put a Budgie Cage Outside

We respect your privacy first and foremost. If you would like to sign up for our newsletter, be entered into giveaway contests, and much more, We would love to have you!

Our Recommended Aviary Kit, save over $400 By DIY

thebirdpeople.com is a participant in the Amazon Services LLC Associates Program, an affiliate advertising program designed to provide a means for sites to earn advertising fees by advertising and linking to amazon.com and potentially other amazon region websites. Here is more about what we do.